THE INFINITE POTENTIAL OF SNOWSKATING

For years, skateboarders have asked themselves how to practice their skills during winter without having to strap themselves to a snowboard. While there are interior skateparks around the world, their limited space, schedules and distance often complicate things for skaters who just wanna ride around and practice their tricks for a few hours between November and May.

That’s where snowskating comes in to change the game! It lets riders to perform the majority of tricks and slides they’re used to doing on concrete, without the need for dry ground. Even better, once you have your snowskate, the whole city becomes a playground. By moving and stacking snow, riders can even try tricks on spots that only exist during winter. Banff locals and tourists alike will be able to give snowskating a try during BARBEGAZI Banff, which takes place January 17-26, 2020. 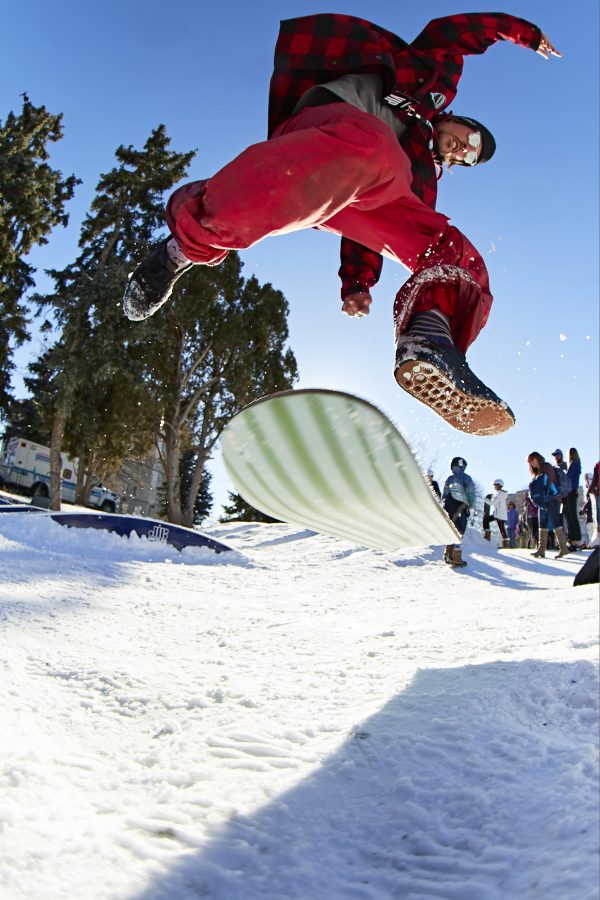 Snowskates were invented in the 70’s, first as toys for young children. However, they quickly became popular with skateboarders and surfers who were looking for a way to glide during winter without strapping their feet to a snowboard. Initially, the typical snowskate had four little skis that reproduced the trucks and wheels on a skateboard. As the years passed, two model types rose to popularity: the single-deck and the bideck.

The single-deck snowskates are now the most popular model with riders. Their simple design is light and resembles a skateboard without trucks and wheels. It allows for a greater range of tricks and slides thanks to the larger surface which touches the snow. However, they aren’t great in deep snow and are usually used for tricks that don’t require much momentum.

The bidecks, on the other hand, are versatile snowskates that let the rider enjoy a greater range of terrain on their boards. The boards are supported by one or two small skis that elevate the rider on the board, and therefore offer better control. This setup brings the riding experience closer to what skateboarding feels like. However, they are much harder to flip and pop off from. That makes them a great choice for people who want to ride as much as they want to do basic tricks.

Here’s what snowskating looks like when pros throw down their best tricks in the city!

Snowskating’s true beauty comes from the fact that with a bit of creativity, a shovel and some elbow grease, you can create new spots anywhere. If you want to try it out in a safe environment with professionals, why not hop on the board for the first time at BARBEGAZI Banff 2020! With a bit of practice, you may want to start exploring Banff to find its best hidden snowskate spots.